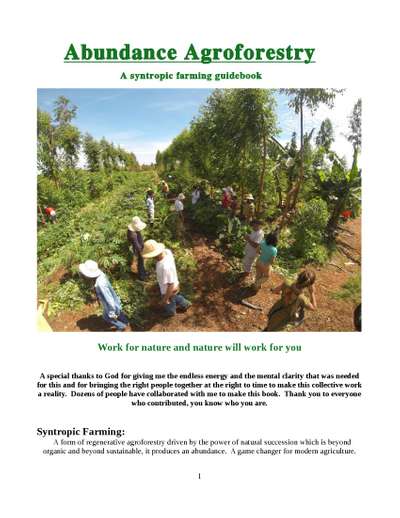 ECHO has an extensive network of agricultural experts working in diverse areas of production and development. Many members contribute to our various publications and resources, often writing or contributing to our existing documents. Some provide self-developed resources for us to share with the rest of our network. One such document is Syntropic Farming Guidebook, written by Roger Gietzen. Gietzen shared about syntropic farming in an evening session at ECHO’s 2018 International Agriculture Conference. He recently completed this guidebook and gave permission for us to post it on ECHOcommunity.org.

Gietzen begins by introducing the concept and principles of syntropic farming. Syntropic farming, developed by Ernst Götsch in Brazil, is an agroforestry approach designed to mimic a forest in several very specific ways. First, plants are densely placed to maximize both horizontal and vertical space, similar to the various strata found in a forest. This enables the system to capture as much of the sun’s energy as possible.

Second, plants and trees are carefully chosen with a process of succession in mind; some of the initial plants will grow and die relatively quickly, while others will grow slowly and steadily over many years. As the system matures, the mix of plants and trees will become more diverse and more productive. Some plants are grown only for the biomass they produce; other plants, while also producing biomass, are primarily grown for their fruits or other harvestable parts.

Intense pruning is a unique aspect of syntropic farming (overstory species are sometimes pruned, removing up to 95% of biomass!). Prunings are used as mulch and provide many benefits such as suppressing weeds, feeding soil microorganisms, and aiding in temperature and water management. According to Götsch, extensive pruning at strategic times also accelerates growth. He hypothesizes that when plants are pruned during their growing stage, they release plant growth hormones into the system that encourage nearby plants to grow more quickly.

Syntropic farming is an attempt to produce food and/or cash crops, and at the same time to rehabilitate and regenerate the land. The promises of syntropic farming are many: large yields; multiple income streams; optimal use of land; no need for external inputs; improved soil quality; minimal weeding; plant resilience due to biodiversity; and better water management, both in extreme wet and dry times. Gietzen tells the story of Götsch’s cacao farm, showing that an established syntropic system can sustain high productivity with a level of labor that is comparable to that needed to manage a conventional farm. However, syntropic farming can be complicated to understand and apply. It requires in-depth knowledge of biological processes, access to many different kinds of seeds, and careful management.

In the second section of his guidebook, Gietzen gives a practical example of what it might look like to implement syntropic farming. He shares detailed, specific planting schemes illustrating one way to apply syntropic farming on existing farmland. The plans were developed specifically for Haiti, but much of the content would apply elsewhere in the tropics. Many of the trees mentioned in Gietzen’s guidebook are native to Haiti; some are described in Bwa Yo: Important trees of Haiti, a book by Joel Timyan. [Table 8.3 in an article called “Mimicking Nature,” referred to at the end of this article, shares other potential combinations of trees and crops that will likely grow well together and that could be considered for a syntropic agriculture system.]

In a book chapter called “Mimicking Nature,” Katherine J. Young describes syntropic agriculture as one kind of successional agroforestry system (SAFS). Her review is helpful for understanding both the potential and the challenges of this unique approach to agroforestry. The profiled SAFS farms are impressive (Götsch’s farm among them), but the challenges are real. As mentioned, management requires a high level of knowledge. Little research exists to validate claims about SAFS. Labor requirements are intense for the first five to ten years of growth. Another challenge is that marketing can be difficult when a farm yields a wide variety of crops, but none on a large scale [that said, this could be a real benefit for a smallholder subsistence farm]. Young concludes, “Nevertheless, despite these current limitations, SAFS show great promise as an innovative approach to increase agro-biodiversity, regenerate severely disturbed agricultural landscapes, diversify harvest yields, and reduce ecological and economic risks associated with conventional agricultural systems.”

You can watch a short video about Götsch and syntropic farming here.

Syntropic farming is a method of agroforestry developed by Ernst Götsch. Its strength comes from aligning with the power of natural succession. Natural succession is the tendency for nature to rehabilitate land, taking it from barren to fertile and densely vegetated.

Ernst observed that this evolutionary process was driven by cooperation among members of the living system in a way that benefits the system as a whole. This is contrary to the Darwinian model which views evolution as being driven by competition. What may appear as competition or destruction in a natural environment is really an attempt to create balance for the benefit of the whole system.

With this perspective in mind, the farm is seen as a unified, intelligent, living system which is meant to evolve over time. For this to happen there are complex interactions occurring between the plants (and animals) and every living being serves an important purpose in the process. When these cooperative relationships are promoted correctly by the farmer, the farm develops into a strong, healthy, living system.