abstracted from “Planting for Prosperity. Push-Pull: A Model for Africa’s Green Revolution”

The push-pull concept was developed by the International Centre of Insect Physiology and Ecology (ICIPE), along with the Kenya Agricultural Research Institute (KARI), Kenya’s Ministry of Agriculture, and Rothamsted Research in the United Kingdom.

ECHO featured push-pull in EDN 77 (2002). At that time, the push-pull system had been tested on more than 2000 farms. A 2011 ICIPE publication (Planting for Prosperity. Push-Pull: A Model for Africa’s Green Revolution), reports that push-pull has been adopted by over 40,000 farmers! We felt it would be appropriate to revisit the topic and spread the word about this growing success. Below is a brief recap of content from EDN 77, written by Dawn Berkelaar, followed by content abstracted from Planting for Prosperity.

How the system works

Trap crops that are attractive to stemborers, such as Napier grass (Pennisetum purpureum) and Sudan grass (Sorghum vulgare sudanense), are planted around a maize field to “pull” stemborers away from the maize. Napier grass produces a sticky substance that attracts the stemborer larvae, then traps and kills them.

Meanwhile, plants that repel stemborer, like desmodium species (such as forage silverleaf, Desmodium uncinatum) and molasses grass (Melinis minutiflora), are used as an intercrop to “push” stemborers away from the maize. Molasses grass also attracts a parasitic wasp (Cotesia sesamiae) that is a natural enemy of stemborers.

Benefits other than stemborer control

Several other benefits result from the use of these plants. For instance, each of them can be used or sold as fodder. Desmodium also fixes nitrogen, improving soil fertility, and suppresses Striga hermonthica, a parasitic plant often referred to as “witchweed.” When maize was intercropped with desmodium, striga was suppressed 40-fold compared to a maize monocrop.

Highlights from Planting for Prosperity

About thirty different grass species have been observed to host stemborers. The advantage of using Napier grass is that it is commonly used for livestock fodder. Besides “drawing” pests away from the maize, grasses such as Napier or Sudan grass are planted on field borders so that they do not compete with the main crop. Stemborer predators other than wasps include ants, earwigs, spiders and cockroaches, populations of which have all been higher in push-pull than in control plots.

Desmodium has been found to actually reduce the number of striga seeds in the soil. It suppresses striga in two ways: (1) the roots release chemicals that inhibit the growth of striga; and (2) it stimulates striga seed germination while inhibiting the radicle (part of the weed that grows towards and attaches to the host plant), causing “suicidal germination” of the striga seeds.

Studies are showing that the plants used in push-pull “communicate” by releasing chemicals that discourage stemborer moths from laying more eggs or attract wasps that parasatize the stemborer larvae. Such knowledge gives researchers key insights into what makes an ideal repellent or trap crop. It also means that planting anything else between the grass border and desmodium intercrop could reduce the effectiveness of the system. 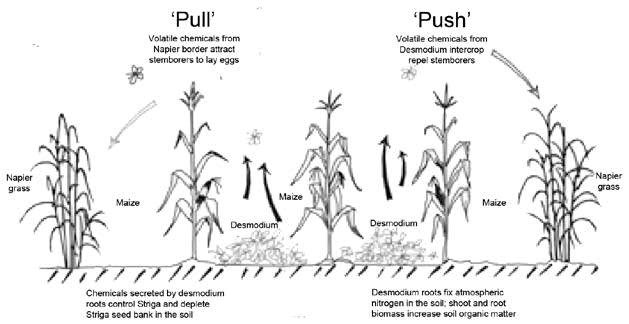 According to an independent impact assessment (Fischler, M. 2010. Impact assessment of push-pull technology developed and promoted by ICIPE and partners in Eastern Africa. ISBN 92 9064 2157), push-pull increased maize yields from 1.2 to 3.5 tonnes per hectare and added the equivalent of about US$ 100 per family per year. Another review showed that, over a period of several years, the benefit to cost ratio exceeded 2.5. While initial labor costs associated with planting the Napier and desmodium are high, the benefits are long term. Increased grain yields and extra cash from forage sales (of desmodium and Napier grass) have allowed many farmers to expand or diversify. Some farmers, for instance, are able to purchase a goat or dairy cow, or breed their animals for increased milk production.

Versatility of the system

Push-pull has spread beyond Kenya and has been introduced in Tanzania and Uganda. It has also proven applicable to other grain crops besides maize, increasing sorghum, millet and upland rice yields by at least 50% and significantly reducing the effects of striga and stemborer in these crops. As these crops are better able than maize to thrive under dry conditions, the push-pull system should be considered in evaluating ways to cope with climate change. In drier areas, where cattle are often allowed to graze freely after the grain has been harvested, the intercrop and border rows need protection from livestock.

Elements of ICIPE’s and KARI’s dissemination efforts have included demonstration plots and field days, farmer-teachers, farmers’ groups, and farmer field schools. Farmer-teachers are farmers who have successfully managed their own push-pull plots and have been trained and equipped to teach others. The ICIPE team has also developed training materials for use in farmer field schools. The group aspect of farmer field schools encourages knowledge sharing and exchange. Various government and non-government organizations have also been involved in introducing the technology. The literature developed by ICIPE and KARI has helped to maintain consistency in what is being communicated through multiple entities to introduce and spread awareness of push-pull technology.

Push-pull is a successful intercropping strategy that emphasizes principles of crop diversity to increase food production by controlling crop pests without expensive pesticides. For much more information, visit www.push-pull.net, which contains the full version of “Planting for Prosperity,” training materials with specifics on how to establish the intercrop and border rows (www.push-pull.net/step_step.pdf), and numerous scientific publications.