Jean Remy Azor works with the Mennonite Central Committee (MCC) in Haiti. He participated in a group keynote presentation at ECHO’s conference in 2007, about MCC's reforestation and "ti fore" (little forest) program. He also helped lead a post-conference workshop. Jean Remy owns and manages his own “ti fore” in Haiti. Farm Manager Danny Blank shared, “I have seen different examples of wood production on small pieces of land in various countries such as El Salvador, Ethiopia, Malawi, and Haiti. Jean Remy has the oldest coppicing and reseeding woodlot started by a farmer that I know of. He started it in 1984 and has not had to replant it since. It is very impressive.” Danny visited Jean Remy and his woodlot in 2007. Below we share the interview between Danny and Jean Remy. Questions in boldface are Danny’s; the text following is Jean Remy’s response. 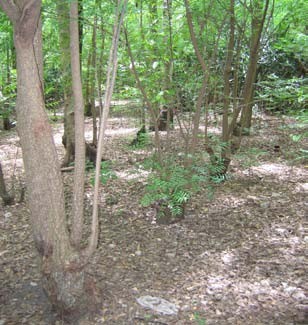 How did you first get the idea, training, or interest in planting a small forest?

I saw a few other forests in other areas of Haiti and that is where the idea came from. Then I came to understand how and why they are important. The impetus for starting my own was because I wanted to put into action a demonstration garden to help people discover how they can make a ti fore, to create an available source of seeds for the nurseries and to increase my personal income to sell charcoal, firewood and wood for construction to the community.

Was this your own field?

Did you need permission to plant this field? I didn’t need direct permission but I had to talk with my mother and explain my plan to her because she was the actual landowner.

What was on that field before you planted? Before the small forest my parents planted corn, sorghum or sweet potatoes and congo beans [pigeon peas].

What were the original species planted? I started with many varieties, mostly Kasya (Senna siamea), Lesena (Leucaena diversifolia) and Neem (Azadirachta indica), but there were several that didn’t develop well.

Did you plant seedlings from sacks or direct seed? I planted a lot of seeds in the semi-direct method and I planted seedlings which came from nurseries.

Please explain about the actual planting of the field-land preparation, burning or hoeing, number of people, labor involved in planting

To start I cut everything on the land which was mostly grasses. After that I planted trees together with crops, (e.g. trees with corn and congo beans.)

Did you purchase your plants?

At that time there was a central MCC nursery in Deschappelle and we had yet to start selling trees, so I was able to get those trees for free.

Was this part of a program? No, this was done on my own initiative, it is 100% private but it does serve as a reference for a lot of local landowners who visit the reforestation project.

Did other farmers in the area plant woodlots? There wasn’t anyone who did the same thing that year, but after two or three years several peasants started small forests in the area.

What was the size of your original planting?

I started the forest in all the land I had because the crops I was growing were taking too much money to grow and the soil was too poor. I never have measured the land officially but I consider it to be about ¾ of a hectare (1.85 acres). The forest is the same size today as the original.

What has/have been the most significant species in terms of production?

Do you coppice (cut low to the ground and allow for resprouts)?

Yes, I coppice the trees, and they sprout several others.

Do you ever replant species or is it a self-sustaining forest? A lot of the trees have been giving off seeds for a long time. [Some new trees come from seeds that fall and sprout.] Also when I cut a young tree it resprouts. Because of this I have never had the need to plant other trees in this small forest.

Can you estimate the amount of labor it takes on a yearly basis to manage the size of your plot? Please explain activities and time involved. I don’t really do a lot of work to manage the small forest. In the first year I worked more, but after the first year there was too much shade from the trees for the grass to grow. To talk about the work in the forest currently, it is mostly trimming branches and repairing holes in the fence. On the average I work 10 to 15 days each year in the forest.

I decided to let a few years go without harvesting trees so they can get larger. I have tried different methods of using the trees and selling wood. All combined, I can get between $500 and $750 US per year. I can say yes, the forest has made some differences in my family’s life because the money I make in the forest is added to buy food, pay for school, etc.

Can you estimate how much wood comes off this plot in a year?

Does it meet your own family's need for wood? Do you use wood, charcoal, gas, or electricity for cooking? What about in the past?

Yes, I have plenty for myself and the rest I sell. For the past 10 years I have used two kinds of energy. To cook in the house, I use kerosene. To make food for a lot of workers in the field, I use firewood directly. I use some charcoal to iron clothing and also to dry corn. Before this I used more charcoal and firewood.

Do you have other woodlots?

Yes, I’ve started another small forest which is growing well for now.

Explain your neighbors' reaction to your woodlot. Are other people interested?

Yes, the neighbors had a lot of reactions when they saw how beautiful it was and all the opportunities it provided both economically and environmentally. A lot of neighbors had an interest in starting their own forest and many have started forests in the past three to five years.

Is theft a problem?

From time to time four or five trees will disappear from the forest, usually when someone local is building a new house.

How would you rate your overall experience with woodlots? It has been an amazing experience. I do have some problems that I need to address so the problems don’t persist, like animals (goats) put into my forest to graze, or Voodooists that consider a forest a space for evil spirits.

What advice do you have for others? The advice I have is for everyone to choose to make a small forest as an economic resource which you can use both when you are young and strong and when you get old and can’t depend upon your physical strength anymore to make money.