A warm season (25-35 °C) crop, cowpea is adapted to a wide range of soil and moisture conditions. For maximum biomass production (or forage and/or soil cover), rainfall amounts of 750-1100 mm are optimal (Tropical Forages); 500 mm or less is sufficient for early-maturing varieties (Dugie et al., 2009). Although tolerant of poor, sandy soils, cowpea grows best in well-drained sandy loam to clay loam soils with a pH of 6 to 7. It does not tolerate frost or overly wet (waterlogged, poorly drained) soil.

How to obtain cowpea seeds

Look for cowpea varieties in the country in which you are working. Other institutions may already be working with one or more improved IITA varieties (website: www. iita.org). Also, be on the lookout for local varieties with multi-purpose traits. 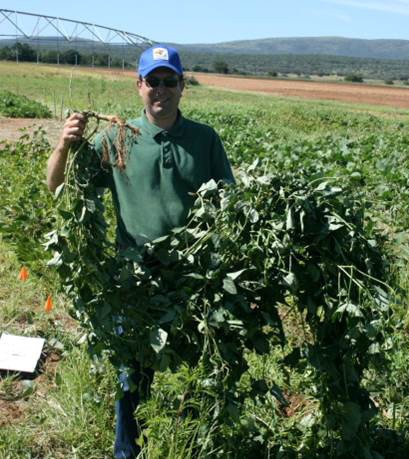 In reference to the ‘Samoeng’ variety fromThailand, Rick Burnette, who now heads up the ECHO Agriculture Department in Florida, had this to say about creeping cowpea varieties:

“In the uplands of Southeast Asia, creeping cowpea varieties are typically grown in association with the main crop of upland rice, along with other secondary crops such as cucurbits. All of these are established at the same time at the beginning of the rainy season. In such situations, creeping cowpea germinates and becomes established while the rice crop is still small, while there is more exposure to sunlight. However, such types of cowpea can tolerate much less sunlight when other crops, especially upland rice, grow taller. As creeping cowpea does not climb, the other crops in the stand are not in danger of being overcome by the viney, prostrate legume. As a result, creeping cowpea increases crop diversity in upland rice fields, offering green pods as a vegetable in the middle of the rainy season. The legume also fixes nitrogen and provides a degree of weed control in the understory of the rice crop.”

Both of these new varieties have grown well on ECHO’s sandy soils at our demonstration farm in Florida. Those registered with ECHO Community as agriculture development workers may request a complimentary trial packet of one or several of the cowpea varieties from the ECHO Florida seed bank. Visit ECHOcommunity.org for information on how to register. We encourage you to grow these alongside your local varieties and compare the growth and production of the plants.

Clear the ground of weeds before planting. Planting should be timed to allow enough time during the rainy season for the crop to mature. Plant three seeds per planting station, thinning to two plants per station at two weeks after planting (Dugie et al., 2009). Use a wider spacing for prostrate varieties than for bush-type varieties. For spreading varieties, plants should be established 75 cm apart between rows and 25-50 cm apart within rows. Depending on the variety, dry beans will be ready for harvest at 90 days (early-yielding varieties) to 210-240 days (varieties that typically flower later in the season when day length shortens) after seeding (Tropical Forages). See references below for more detailed information.

CGIAR fact sheet (with information on the economic impact of grain/fodder cowpea): http://www.cgiar.org/our-research/crop-factsheets/cowpea/