Grass pea (Lathyrus sativus) is a drought tolerant legume used as forage for livestock or as food for people (seeds are roasted, cooked into porridge or ground for use in bread). The plant thrives in poor soil, drought or flooding. 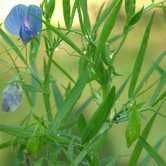 Grass pea can also potentially cause paralysis, due to an atypical amino acid in the plant that can damage a person’s nerves. In the article “Detoxifying Desert’s Manna” (Science News Online; July 29, 2000), author Janet Raloff explained: “When consumed in large quantities for just two or three months, the untreated seeds can trigger a disabling spasticity known as lathyrism. Unless affected people find other sources of food quickly, their condition could worsen, and they could eventually lose all use of their legs.” Men between the ages of 18 and 40 are most vulnerable to lathyrism.

Now, ICARDA (International Center for Agricultural Research in the Dry Areas) in Aleppo, Syria, has bred grass pea cultivars that are practically toxin free. The process took 15 years and cost $1 million. The low toxin strains have yield, taste and environmental ruggedness similar to the original.

In some cases a lathyrism epidemic affects a whole community. In part of Ethiopia in the late 1990’s, one in five people was left unable to walk. In Bangladesh in the early 1970s, up to 70,000 people were disabled (2 in 100 of them permanently).

Of people eating higher-toxin grass pea seeds, only a few develop lathyrism. Development of the disease may be linked to a deficiency of trace minerals. Livestock rarely show symptoms. E. Ann Butler, a legume specialist at University College London, “contends that people fall victim to lathyrism not because of ignorance so much as climate and economics.” During droughts, water (to leach the seeds’ poison) and fuel (to boil the seed) are scarce. Even treated seeds are not necessarily safe. Butler tested peas that had been pretreated (by soaking for 10 minutes in hot water), and found them not much reduced in toxin.

The amino acid of interest in grass pea is referred to as ODAP. It may give grass pea resistance to pests or to extreme climates. Peter S. Spencer, a neurotoxicologist at Oregon Health Sciences University in Portland, notes “the amino acid seems to masquerade acid], called glutamate, that’s found in animals.” It is similar to MSG (monosodium glutamate), which is added to food to enhance flavor. ODAP seems to over stimulate nerves, killing them

.Most grass peas contain between one and two percent ODAP by weight. Eating a small amount is harmless. Lathyrism typically develops when 30% of calories come from grasspea for several months.

Low-ODAP strains of grasspea were first developed at Agriculture Canada’s lab in Morden, Manitoba. Researchers developed a strain with just 0.01% ODAP, but it didn’t yield as high and it looked different from the original Indian line (for example, it was too large). The new strain was distributed to breeders in research centers in Africa and Asia, to hybridize with popular local strains. By 2000, it was still not available to farmers.

Breeders working at ICARDA crossed L. sativus with Lathyrus cilliolatus, a low-toxin relative from the Middle East. The best resultant strains produce just 0.04% ODAP but taste like the original grass pea. Some farmers are field-testing the new varieties, but ICARDA does not produce and distribute large quantities of seed. Since it is a subsistence crop, small-scale farmers don’t tend to buy seed. They either grow it themselves or receive it in barter. There was no existing central point for dissemination of seed and information. ICARDA hired sociologists, anthropologists, etc. to work with officials to establish networks for quick distribution of seed.

Clayton G. Campbell, a retired Lathyrus breeder for Agriculture Canada, points out that grass pea could be a good crop for farmers in developed countries, too. It has high protein content (28%, twice that of wheat). In Manitoba, Campbell obtained yields of 5000 pounds per acre, which is similar to field peas and three times that of soybeans. Grass pea does great in drought situations, yielding more than 1000 pounds per acre with only 2.5 inches of rain. But people are too worried about ODAP, even in lowtoxin varieties. This is despite the fact that the root of Korean ginseng (Panax ginseng) also contains ODAP, in similar concentrations to L. sativus.

Dr.Ali M. Abd El-Moneim, Senior Forage Legume Breeder at ICARDA, agreed that grass pea is a self pollinated crop, but commented that 2.0 to 25% out-crossing does occur, depending on location and honey industry. He added, “Our low neurotoxin lines have a marker gene that is the white flower color. Farmers can differentiate at morphological level between low and high neurotoxin genotypes. At the same time to maintain the genetic purity of low neurotoxin lines we plant them in isolated areas where no other high neurotoxin land races are planted.”

El-Moneim shared, “In 2005, a very low-neurotoxin variety named “Waise” [was] released in Ethiopia and another variety, “Ali-Bar,” released in Kazakhstan. A package of technology…has been offered to the farmers in Ethiopia. Seed multiplication is being made in collaboration with national programs.”

ECHO recently received seed of ten selections of low-toxin grass pea from ICARDA. Members of our overseas network who work with small-scale farmers may request a free packet of about 50 seeds representing a mixture of these selections. You may then save and multiply seeds of the bestperforming plants. We would greatly appreciate hearing about your successes or failures with these seeds. We will share your observations with scientists at ICARDA. To ensure a continued supply of seeds, ECHO will be growing out each of the ten selections on our demonstration farm.