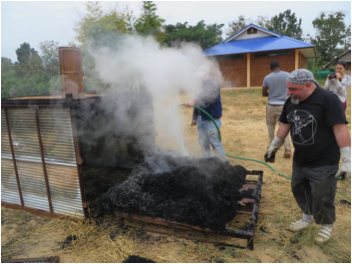 ECHO Asia has been privileged to visit Warm Heart Foundation in Phrao, Thailand over the past couple of months to visit with staff and observe a prototype in-field “biochar” unit that turns rice straw into a valuable soil amendment.

Every February-March, rice fields are burned throughout Thailand. These very low temperature burns produce huge amounts of smoke that causes serious public health problems, as well as greenhouse gases, smog precursors, dioxin and furans. This practice also destroys valuable organic matter contained in the straw and kills the micro-fauna in the soil.  In comparison, the field prototype that Warm Heart is developing utilizes the rice straw as a resource by pyrolyzing it. Charring the organic matter at high temperature in the absence of oxygen reduces the noxious gases released and is virtually smokeless. The char yield is approximately 20% of the original straw. (Fig 1). This char is then mixed with organic matter (i.e., compost, manure, or the like) and allowed to sit for a few months, turning into a rich, locally-sourced, organic amendment. 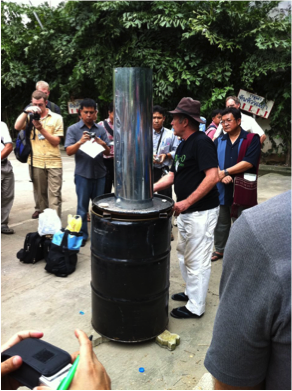 Because the pyrolyzation of the rice straw keeps virtually the entire physical structure of the straw intact, the char is incredibly packed with pore space. The pore space in the charred rice straw is good for retaining water, increasing drainage capacity, and providing a home for macro invertebrates, microorganisms and fungi. The charred rice straw also has a very high “Cation Exchange Capacity” (greater ability to hold onto cations or nutrients). This causes it to quickly accumulate a crust of essential minerals and the microorganisms necessary to convert them into nutrients readily taken up by crops.

This technique is a form of making “biochar,” a popular method promoted amongst the ECHO network. Traditionally, biochar has been made in small batches using either a “Top Lit Up Draft” (TLUD) 200L barrel kiln (Fig 2) or a biogasifier cook stove. These methods offer great techniques that utilize appropriate technology to expand on-farm capacity, but they do not provide farmers the capacity to handle tons of rice straw commonly left on their fields, an excess of material which created the necessity for farmers to traditionally burn their straw in smoky piles, increasing air pollution and reducing soil fertility. Warm Heart hopes to expand farmers’ capacity and capture available on-farm resources by creating a moveable, cheap-to-construct field unit which can char 65kg of rice straw in about 30-40 minutes, providing valuable biochar feedstock (Fig 3). 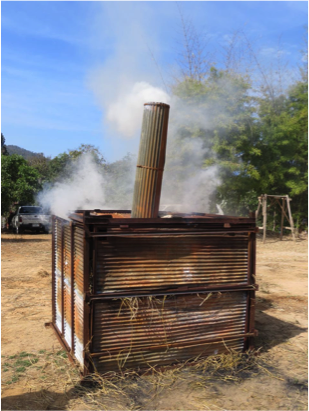 ECHO Asia staff have seen the prototype of this unit in action, and it is very impressive! If Warm Heart is able to show the economic benefit to farmers of pyrolyzing their straw instead of burning it, as well as the public health benefit (perhaps with some government involvement and promotion), we think that this concept may provide large benefits for certain sectors of the population not only Northern Thailand, throughout the region of Southeast Asia, particularly in the February-March "burning season."