An article by Francis Hallé in Nature and Resources, Volume 32, Number 3, 1996, explains several techniques used to “improve, select, propagate or preserve plant growth.” These techniques are called “phytopractices.” Most of them are inexpensive and simple to use but labor-intensive. The practices generally apply to individual plants, and most need to be repeated each growing season. Hallé, a professor of Botany at the University of Montpellier II in France, has compiled a great deal of information about phytopractices. We have summarized a few of these techniques. Each technique is labeled with the plant species to which it applies. Note that, in most cases, neither an explanatory hypothesis nor scientific confirmation for the technique is given. ECHO cannot guarantee the accuracy of these reports, but they would be interesting to experiment with. If you try any of these, please let us know the results

Mango. In Sulawesi, Indonesia, some farmers knot the trunk of a mango tree when it is at a young stage. Apparently this trauma induces flowering at an early age.

Jackfruit. “The…jackfruit (Artocarpus heterophyllus) usually bears its large fruit (up to 80 cm in length) on the trunk and main branches, high up in the tree. In the Songkhla Province of Thailand, the young jackfruit is planted over a large stone or metallic plate, thus blocking the growth of the tree’s tap root.” As a result, fruits grow in clusters around the base of the trunk.

Citrus. In China, citrus growers facilitate fruit collection by rolling the roots of a fruit tree around themselves before planting. The technique reportedly allows for better uptake of fertilizer through the superficial fine roots. It also results in reduced tree height, making fruit collection easier.

Banana. In Thailand, one of the tallgrowing banana cultivars is too frail for farmers to access fruit by ladder. Sometimes a farmer will gently bend the fruiting stalk to the exterior of the stem, first using a machete and then inserting a blade of bamboo as a wedge.

“The leaves of the plant are unaffected and the fruits are of the same size and flavor as when growing upright but they are now more easily harvested." 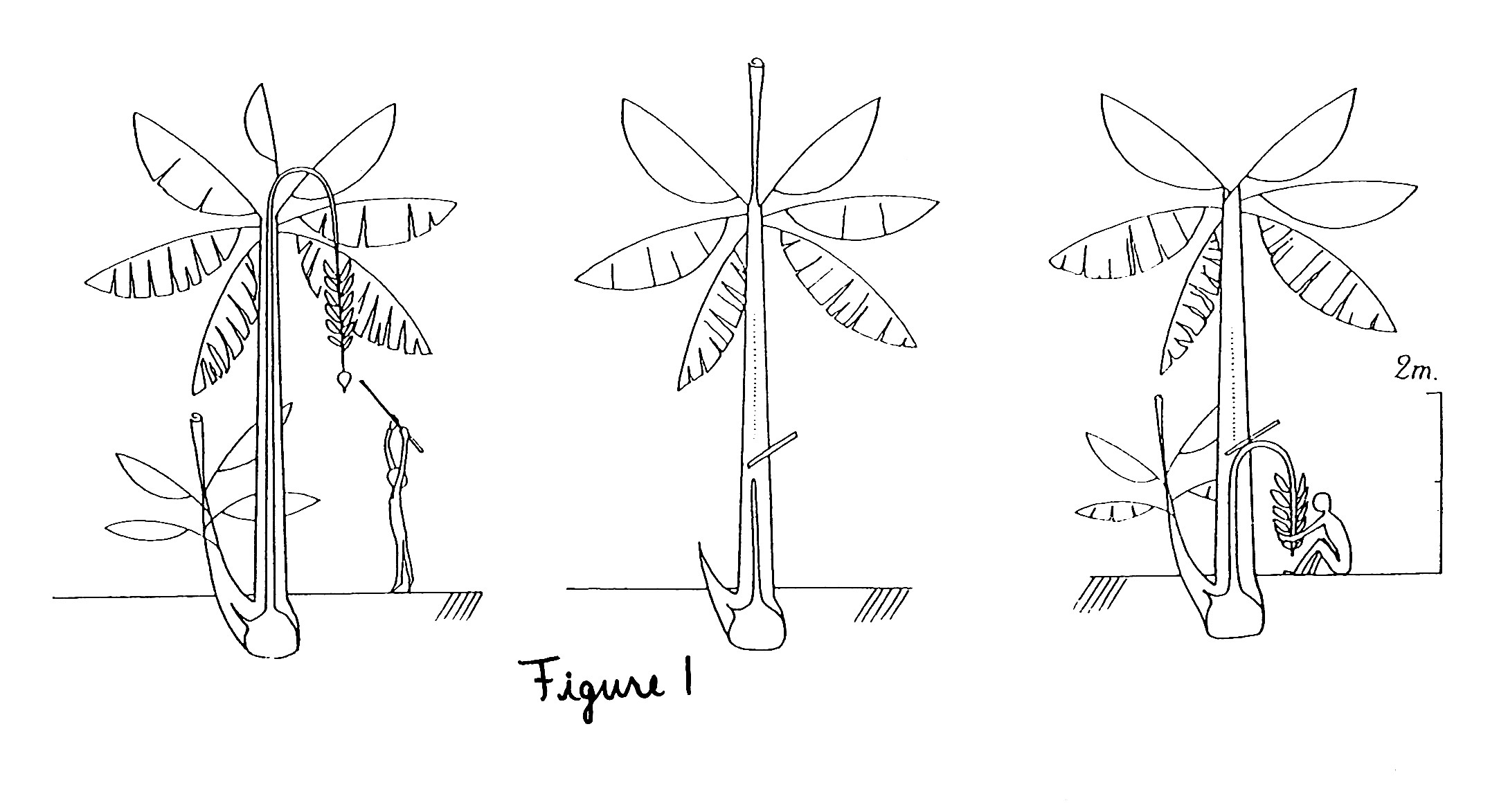 Figure 1. Using a blade of bamboo as a wedge, the fruiting stalk of a banana was bent to the exterior of the stem, making fruit easier to harvest. Figure extracted from an article by Frances Halle published in Nature and Resources, Volume 32 Number 3 (1996), page 5 © UNESCO.

Yam (Dioscorea sp.). In Madagascar, farmers sometimes drive a section of hollow banana stem into the ground and insert the bud of a yam tuber. Decomposition of the banana stem results in a rich and humid environment that can increase the growth of yam tubers. Apparently tubers may reach 1 m in length [the normal length of yam tubers was not stated]. [Staff member Larry Yarger suggests that increased growth could also be due to added potassium from the banana.] 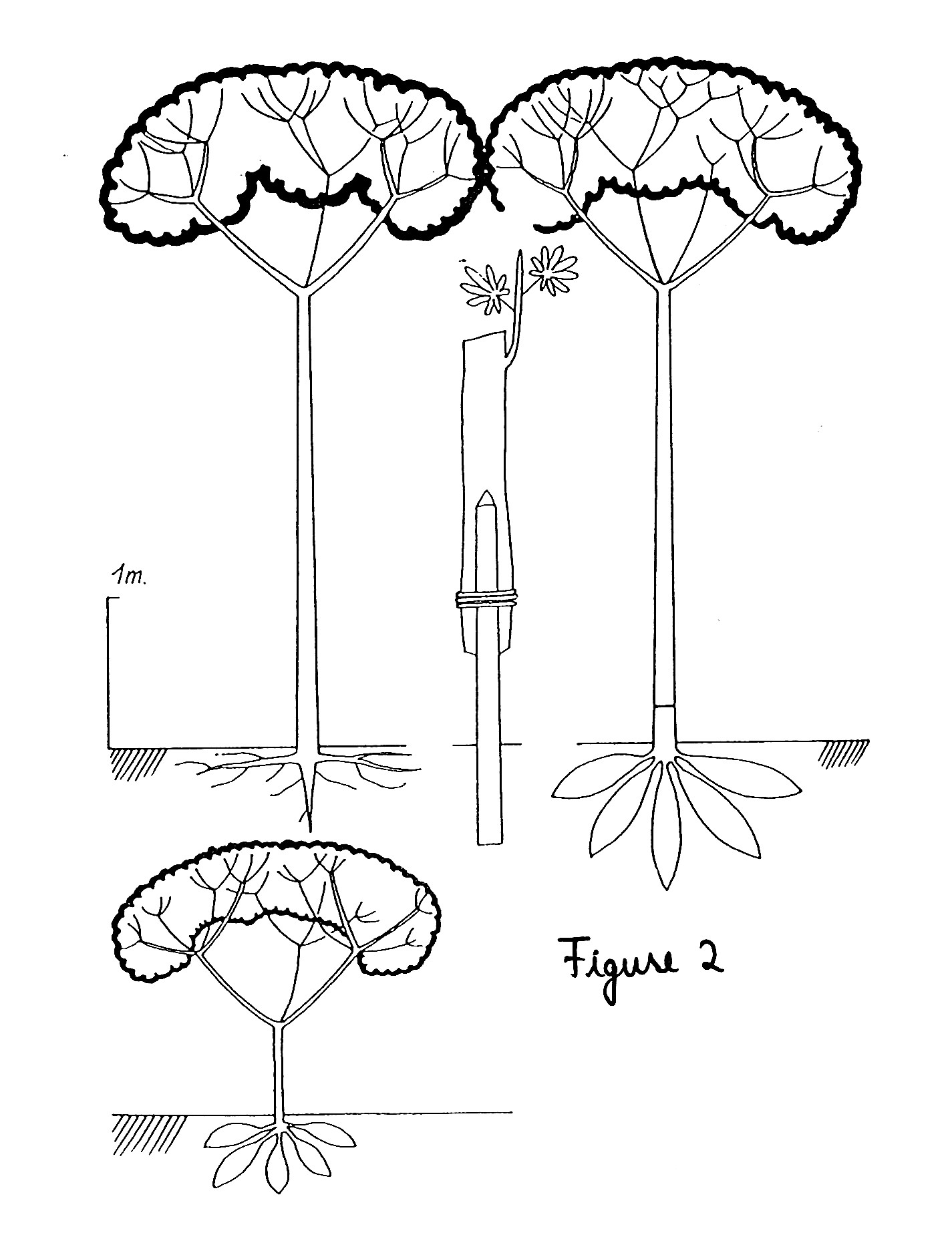 Figure 2. Two species of cassava were grafted together, resulting in a tree that produced very large tubers. Figure extracted from an article by Frances Halle published in Nature and Resources, Volume 32 Number 3 (1996), page 12 © UNESCO.

Figure 3. Farmers girdled the stem of a cassava plant, then covered the base of the plant with soil to encourage root growth. More tubers resulted. Figure extracted from an article by Frances Halle published in Nature and Resources, Volume 32 Number 3 (1996), page 10 © UNESCO

Cassava. In Java, Indonesia, a peasant farmer named Bapak Mukibat grafted two species of cassava in 1952. One species was a tree and the other was a bush that yielded tubers (Figure 2). The result was a vigorous plant that produced tubers. “Unlike classical graftings of this kind, it is the rootstock and not the scion that is considerably modified. The result is a tree with giant tubers, with a growing period extended to 18 months and a yield that can reach 96 t/ha/year, ten times normal production.” [Ed: ECHO can send more detailed information on the Mukibat System from our files, including the unusual grafting technique Mr. Mukibat used (necessary because of the thick stems). The tree to which he refers is the ceara rubber tree (Manihot glaziovii). We tried the technique once but the plant froze. We plan to try again.]

Cassava. In Malang, eastern Java, Indonesia, farmers are able to increase the number of tuber roots produced by a cassava plant. After initial tuber growth, they girdle the stem about 10 cm (4 inches) above soil level, and then cover the base of the plant with rich soil. The mounded soil encourages root growth, and the roots become a new set of tubers above the first set (Figure 3). [Note that once the stem is girdled, the bottom tubers will not grow anymore. The ring around the outside of the stem (containing the phloem) is severed when the stem is girdled, so no more products of photosynthesis will reach the bottom tubers. It would be interesting to know when the older roots are harvested and if the quality diminishes if harvest is delayed after growth stops.]

Fruit trees. In Thailand and Indonesia, several seeds of the same tree species are sown close together (less than 20 cm/8 inches apart). When the young seedlings are about 80 cm (32 inches) tall, the bark is rubbed off one side of the stems and they are tied tightly together. The tissues fuse and the tips of stems of weaker plants are removed, resulting in a vigorous tree with several root systems. Fruit trees treated in this way apparently reach sexual maturity more quickly. Many different fruit trees treated this way are seen in Bangkok markets, including citrus, durian, mango, jackfruit, tamarind and star fruit. [Be careful not to rub the bark off the whole circumference of the tree, or the tree will die.]

Potato. Here is a method to increase the number of harvestable potatoes produced by a potato plant. The plant is surrounded with a circular chicken wire grill that is gradually filled with soil as the plant grows. Young leaves must not be covered. Covering older leaf axils with soil triggers the growth of axillary stolons. These stolons then produce new tubers. Up to 100 kg (220 lbs) of potatoes can be harvested from the plant at the end of the growing season.

Gourds. In the dry zone of Sri Lanka, gourds require watering in order to grow to normal sizes. Instead of watering the whole plant, “a jar of water is placed near the gourd and the two are connected by a piece of cloth which passes through the fruiting stem. The cloth acts as a wick and water rises by capillary action and is taken up by the fruit which grows rapidly to a large size.”

Location-specific trees. This technique involves using the whole tree to catch water that condenses from mists. In the Canary Islands, the endemic laurel (Ocotea foetens) grows in areas that have frequent mists but little rain. Water from the mists condenses on the trees and runs down to the base of the trunks where it is collected in wells or in bowls. In this dry area, the technique is used by both passing travellers and resident villagers. In Cape Verde, fourcroyas (Agave fourcroydes) can capture 20 liters of water per day when used as ‘fountain trees.’ Olive trees in Oman can produce 60 liters of water per tree per day. [Ed: we have noticed it “raining” under the Casuarina tree near ECHO during a heavy fog.] 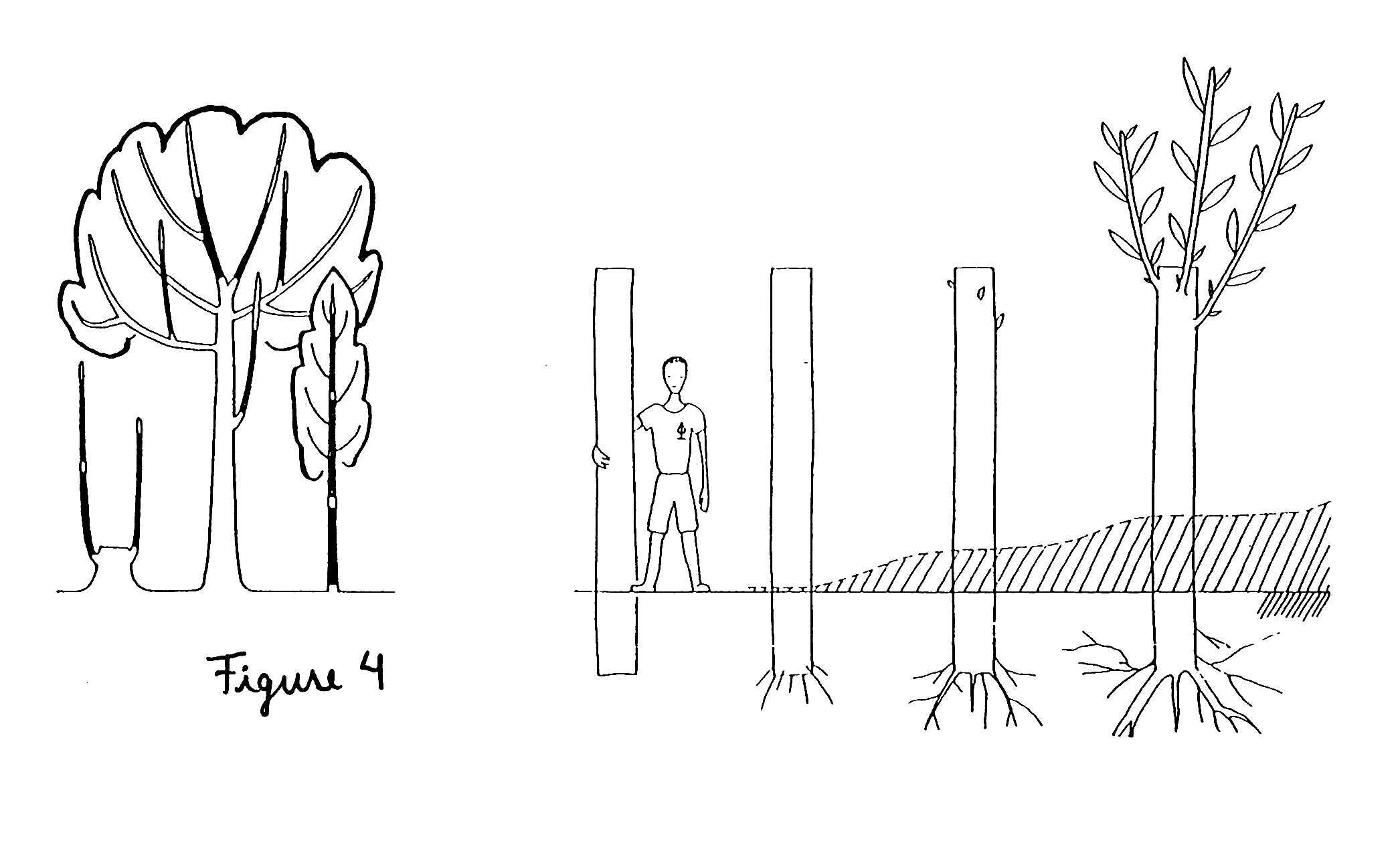 Figure 4. Cuttings two to five meters in length are used to grow trees quickly. The left side of the figure shows the best locations from which to take cuttings. Cuttings that take root grow quickly, unimpeded by other vegetation (shaded area on top right part of figure).Figure extracted from an article by Frances Halle published in Nature and Resources, Volume 32 Number 3 (1996), page 15 © UNESCO

Fruiting vines. In the Asian tropics, the fast-growing snake gourd liana [Trichosanthes cucumerina] is planted for production of very long fruits. In Sri Lanka, the fruiting liana vines are wound around a frame about 2 m (80 inches) above the ground. A stone is tied to the end of each developing gourd. The weight of the stone pulls the fruit downward and substantially increases its size. As the fruit grows, stones of increasing weight are used. The technique may specifically be used to produce straight fruits instead of spiral or twisting ones, but it also seems to induce higher production. Hallé writes, “The weighted gourd absorbs greater amounts of water and nutrients, and may attain a length of 2 m. The same technique has been observed in Java and is used in fruit orchards in Europe where bending branches downwards produces a similar increase in crop.” [No details were given regarding the increase in length and weight of the fruit.]

Trees. The use of pole cuttings to multiply trees results in high success rates and rapid growth. The cuttings are 2 to 5 m (80 to 200 inches) in length and 10 to 30 cm (4 to 12 inches) in diameter (Figure 4). Each cutting is placed vertically in the soil where it quickly roots and grows into a fast-growing tree, without being impeded by adventitious vegetation….Little maintenance or weeding is required.” [There are a few disadvantages to this technique. For example, a tree will only yield a few cuttings when they are this large. Cuttings in general tend to have weaker root systems (and no tap root) compared to plants grown from seed. Also note that only certain species have this ability to grow from cuttings.]