“Chaya, sometimes referred to as the ‘Mayan Spinach Tree,’ has caught on so well that there have been articles in the main newspapers in Guatemala, and cuttings are in high demand. We have four ‘chaya farms’ sourcing cuttings now, and I still can’t get enough to meet the demand. We have held classes and cooking workshops for NGOs, government social programs, women’s groups, and anyone who will listen. Our PowerPoint presentation will be posted on our website, later in 2014.”

We encourage you to check out the Miracles in Action website (www.MiraclesInAction.org) There you can view two chaya videos. According to Penny, “One is about general nutrition with an emphasis on chaya and super foods (in Spanish with English subtitles). In that video we also promote chia seeds, called ‘chan’ by the indigenous population [see EDN 110 for more about chia]). The other chaya video is about how to make fortified tortillas by adding chaya to the masa dough—‘Tortillas Verde’ or green tortillas.” Both videos are online, at http://vimeo.com/75339569 and http://vimeo.com/79052427.

Penny shared that she and colleagues have developed recipes with chaya for rural Mayan kitchens. She added, “Our next work will be to create healthy snacks using super foods to be made by mothers and sold as a business outside schools. The kids buy a ton of junk food at recess, and we want the moms to sell alternative, healthy snacks and drinks. Our chaya recipe book is available on our website under ‘documents.’ It is currently only available in Spanish. This site also has our chaya informational brochure in Spanish and in English.” https://miraclesinaction.org/photos-docs/documents/

Dr. Price originally told Penny to learn everything she could about chaya. She commented, “Learning about chaya was the hardest part, because there is not a lot known or published on the internet. Much of what I found is in Spanish published by the Food Science and Agriculture Departments under Dr. Bressani and Dr. Cifuentes at the University del Valle in Guatemala. 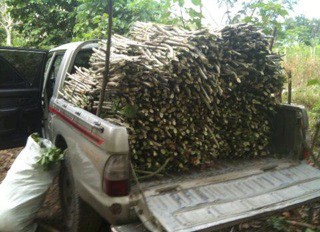 Penny warned (as ECHO also does) that chaya should not be eaten raw, due to the cyanide in the plant cells. “University del Valle research answered our question concerning how long one must cook chaya to make it safe for eating. [They recommended] 15 minutes, and slightly less if the chaya is chopped before cooking.” It is also safe to drink the cooking water, which contains vitamins and minerals. Despite the warning to cook chaya, Penny commented that people regularly consume raw chaya that has been pureed with lemon or lime, in a blended drink. She has never heard of anyone experiencing acute symptoms of cyanide poisoning after drinking it. [Little is known about what chronic effects might result, if the blending and acid have not removed sufficient cyanide.] In Cancun, Mexico, ‘Jugo de Chaya’ (chaya juice) is popular at juice stands. The added vitamin C from the lemon would improve the absorption of iron from the chaya (which has double the iron, calcium and protein and over three times the amount of vitamin C compared to spinach). Penny added, “I have read several research articles stating that chaya can help diabetics lower their blood sugar. However, none of the articles recommends how much chaya needs to be consumed, in what form, when, or how often.

“From the University del Valle’s research we learned that there are four best-known varieties of chaya. Chichicaste is the wild variety with thorns, and is best used as security fencing, or destroyed. Picuda chaya leaves have more points, and when fully grown, the plant looks more like a tree with a trunk, rather than a bush. Rodunda (round) chaya is popular in the Yucatan of Mexico; it produces fewer leaves, but they are generally large and round. The variety we promote in Guatemala is Estrella (star) chaya with leaves that look a bit like maple leaves, but larger. We selected Estrella chaya after analyzing the nutrition research. This variety is slightly higher in protein and other nutrients, and has more leaf mass than other varieties. Estrella chaya is the variety grown at ECHO.”

Penny shared a final comment. “I have read over and over how extremely resistant chaya is to disease and pests, and that has not been my experience with chaya in Florida or Guatemala. It tends to recover from disease, but it is not ‘extremely resistant’ as the literature states. The leaves will curl and sometimes yellow and fall off during the dry season when the weather is cooler, but it always comes back, and continues to produce healthy, nutritious green leaves year after year. It grows best at the coast where it is hot and humid, but we have it growing up to 5,000 feet in the Highlands; it’s just not as prolific.” 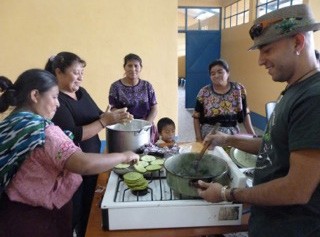 Figure 4. Pedro Rodriguez, a chaya and nutrition promoter, does four-hour workshops with a PowerPoint presentation followed by hands-on cooking and tasting of chaya. Here he is sharing two favorite dishes—chaya tortillas, and nachos with chaya. Photo credit: Penny Rambacher.

Interest in chaya is also growing in Asia.Rick Burnette, head of the ECHO Agriculture Department, shared, “I heard more about chaya’s spread in SE Asia [recently]. Melanie Edwards, a development worker in Myanmar, picked up chaya cuttings from ECHO in 2009 to introduce there. The production and interest in chaya there is thriving.”

Ken Huong in Thailand wrote to ask a question about chaya. He read online (in the Wikipedia article about chaya/Cnidoscolus aconitifolius) that “Cooking in aluminum cookware can result in a toxic reaction,causing diarrhea.” No further informationwas given, to explain what kind of toxic reaction might occur. Ken commented, “We now have people coming to us for cuttings, and guess what? Here people cook in aluminum! [It is] cheaper than stainless steel….How can we possibly tell people they shouldn’t cook chaya in aluminum?”

Ken asked what we at ECHO knewabout reasons to avoid cooking chaya in aluminum pots. Boonsong Thansritong, Agriculture Operations Manager for the ECHO Asia Impact Center, commented that he has cooked chaya in aluminium several times, but never experienced diarrhea from it. Here in Florida, we could not find any explanation for the recommendation.

I asked Penny Rambacher if she had heard the recommendation against cooking chaya in aluminum pots. She did not recall reading about it, but added, “I can tell you from experience that we once accidentally cooked chaya in an aluminum pot during one of our chaya/nutrition workshops, and everyone got diarrhea. That is enough to make me believe it is probably not a good idea.”