An extension publication puts it whimsically: “If you can’t grow okra, we can’t help you!”(MJ Stephens, U of FL). I have loved growing and eating this plant since I was a child living in the southern US. The question is, what does okra not do? It provides food, feed, forage, fiber, foliage, fuel and cooking oil. (The ability to turn atmospheric nitrogen into fertilizer is about the only asset it is missing!) Okra is a temperate/tropical plant that can be grown as a perennial in some areas. Even as an annual it can be cut back to about 4 feet and will continue to branch and produce pods until the weather gets too cold. Leaves, seeds, pods, flower buds, shoots, and calices are edible. This member of the Malvaceae family (cotton and hibiscus) is also a good source of nutrition, providing vitamins A and C, protein, calcium and iron. The amino acid composition of okra seed protein is similar to that of soybean. (Aminigo and Akingbala. 2004. J of Applied Sciences and Environmental Management.)

The seeds are high in protein and oil (F.Martin). The oil, useful for cooking, is made of unsaturated fats and is easy to process using a hand mill and sieves. The seed can also be roasted and used to make a caffeine-free coffee substitute! The foliage, which varies from broad and full to extremely slender and deeply lobed, provides good biomass, while the stems can be burned as fuel. The fiber can be used to make rope and paper. Our ECHO librarian paints dried pods and uses them as Christmas ornaments! 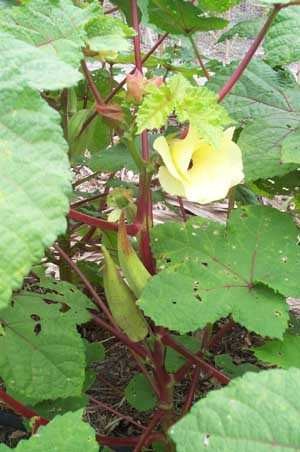 We have seven okra varieties in our seed bank. African (West African), ‘Borneo’, ‘Burgundy’, ‘Clemson Spineless’ and ‘Prelude’ are open-pollinated varieties, and ‘Ever Lucky’ and ‘Greenie’ are hybrids.

African Okra versus Common Okra. African okra (sometimes called West African okra) is actually Abelmoschus caillei. Its distribution is restricted to humid to perhumid climates in Africa (a perhumid climate is the wettest type of climate and has humidity values of +100 and above). African okra is also called “late okra” or “dry season okra” (PROTA). We have seen that it has a longer productive period than other cultivars at ECHO, even though it starts producing later. This is apparently a common feature. Commercial growers often prefer cultivars like ‘Clemson Spineless’, which is early, productive and has a uniform shape. A. caillei performs better in more humid climates than common okra. African okra is also more tolerant of diseases and pests compared to the common okra.

ECHO Variety Trials. We conducted two okra variety trials at the ECHO farm, one in 2003 and the other in 2004. In 2003, we grew 15 varieties of okra. In 2004 we grew six varieties that did well in the 2003 trial. The results showed no statistically significant differences in total yield over the four months of harvest. However, we did learn that some varieties produce much earlier in the season than others and continue to produce throughout the growing season. The late-yielding varieties were hardier in terms of withstanding harsh weather and insects.

Early/Middle Producers. ‘Ever Lucky’ and ‘Greenie,’ Taiwan hybrids from Known-You Seed Company, performed well in both trials. Both showed early to middle production. ‘Prelude,’ the earliest producer, continued to bear fruit for two months. In the first trial, ‘Parbhani Kranti,’ an Indian variety that has Abelmoschus caillei ancestry and is resistant to yellow vein mosaic virus, was an early producer that continued to produce well over the trial period. In the second trial it did not perform as well. ‘Burgundy’ (red pod) was another early producer. In the second trial only 6 varieties were tested, among them ‘Ever Lucky,’ ‘Greenie’ and 'Clemson Spineless.’ Clemson Spineless is the most commonly grown okra in the United States.

Late Producers. In both trials, the African okra was the last to produce. The advantage of African okra is its vigor and its ability to stand up against the winds and rains, as evidenced at ECHO when the plant was confronted by Hurricane Charley on August 13, 2004. One of our past interns found that African okra did the best among the okra varieties he evaluated in the Gambia. 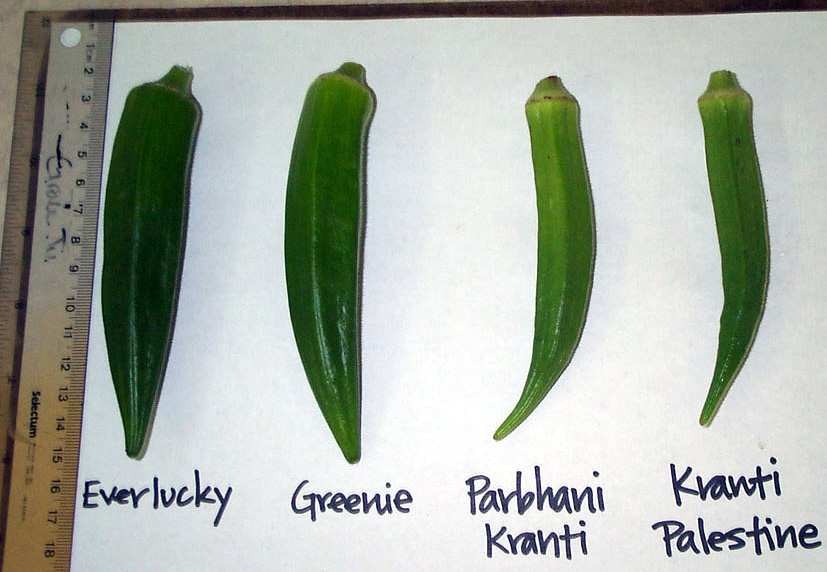 Several of the okra varieties found in ECHO’s seedbank. The two on the left are different accessions but the same species. The varieties on the right are both hybrids.

Additionally, Dr. Tim Motis found that African okra performed well in a trial at ECHO’s Small Farm Resource Development Project that he directs in Haiti. ‘Borneo’ is another late variety that did fairly well. Planting early, mid and late producers is advantageous because it allows continuous production for consumption and for the market over several months.

African Origins. Okra, also known as quimbombo and gombo, has African origins. Okra may have originated in Ethiopia but is now grown all over the world. It does well in arid areas but thrives in many types of environments (it has made some weedy plant lists). It is the most commonly used vegetable in some West African countries. Pods are picked before they are too tough and fibrous. They do not keep well, although dried okra can be used in the same dishes as fresh okra. It can be cooked several ways: sautéed, fried, added to casseroles, boiled, and used in gumbo. Take note that the pods are mucilaginous (slimy); ECHO’s editor, Dr. Martin Price, wrote, “Like many who did not grow up eating okra, I am not fond of the “slimy” feel or the coatings [of flour or cornmeal, for example] that people put on it when cooking to try to disguise this feel. But Pat Lahr in Haiti taught me how to make okra a tasty, non-slimy vegetable without adding a coating. Simply slice thin cross-sections and cook in a lightly oiled pan at a higher temperature than you would normally use. Because of the high temperature, stir constantly. When some slices start to turn quite dark, it is ready to eat. Try it. You might become a new okra fan.” Dried and powdered okra can provide a supplementary source of protein and vitamins.

Although okra is a hardy plant, some varieties are still susceptible to nematodes and fungal diseases. Mosaic virus can be a problem in certain regions. The common okra flowers were reported to be susceptible to ant damage in Haiti (Dr. Tim Motis). In general, African okra is much less susceptible to disease and pests. One caution to consider when introducing this vegetable is that the plant can be very prickly. Recently while speaking with a group of visiting agricultural students from Bolivia, Burma, Philippines, Liberia, Burkina Faso and India, I found that they already knew the virtues of this multipurpose, ubiquitous crop in their country. If you are interested in trying this amazing plant, please contact us.

Trial size packets of okra (varieties mentioned earlier in article) are available free to those working overseas in agricultural development.