Several years ago (in EDN Issue 43, December 1993), we wrote that seed was available for a carrot that will set seed in the tropics (normally carrots only produce seed in temperate climates with a cold winter). Dr. Warwick Kerr sent us the original ‘Uberlandia’ carrot seed from Brazil nearly ten years ago. In our 1993 article, we mentioned that someone familiar with plant breeding could do a great service to the peasant farmer by selecting seed from plants producing better quality carrots.

In 1994, Reed Franz, a retired vocational agriculture teacher from central Florida, took up the challenge and started with a packet of Uberlandia carrot seeds. He planted the carrots in the first week of January. At the beginning of May, he evaluated the carrots by digging down alongside each, checking the tip, and cutting a notch in the side. Reed was selecting for several characteristics: pleasing appearance, acceptable size, nearly parallel sides and a somewhat blunt tip, tenderness, pleasant taste (not woody or bitter), a high ratio of xylem to core, and an intense orange color. Unsatisfactory carrots were pulled out and burned before the seed stalk began to grow rapidly. (These same selection techniques can be used with other carrot varieties.)

When flowers opened and pollen appeared, Reed hand-shook the flower heads over each other to transfer pollen. He did this two or more times per day during peak pollination time. Seed heads were gathered as soon as they turned brown, then put in shallow trays and brought inside for drying. When umbellets became brittle, the seed heads were hand crushed and worked through homemade screens of various mesh sizes. A small amount of seed was set aside for the next year’s crop, but Reed brought the majority to ECHO for distribution to our network. 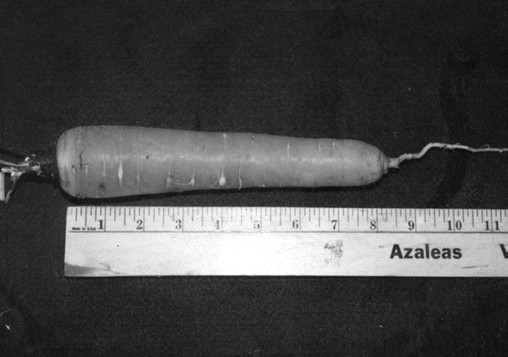 At the first harvest more than six years ago, only 3-4% of the carrots were orange, and many of them were very thin. With each generation, the size and color of the carrots improved. The carrots Reed is producing now are a good size and a deep orange color. At this point, the Uberlandia carrot is ready to be grown and selected in specific locations.

Rick Burnette has grown these carrots at the Upland Holistic Development Project (UHDP) Center in Chiang Mai Province, Thailand. He says that at UHDP, Uberlandia carrots have been planted for at least one year and they have already harvested two generations of seeds from the plants. He recalls that the carrots set seed in one plot during the early cool season and later during the late hot season. Although they hadn’t dug many roots (because they are trying to save seed), the mature ones that they did pull up were about six inches long. The plants were sprayed weekly or biweekly with a botanical pesticide spray made of neem, lemongrass and galangal. Despite this treatment, a few of the roots were infested with root maggots and later rotted.

Burnette writes, “I’ve been encouraged that the variety seems to have performed fairly well so far and I consider it to be a likely good source of vitamin A for home gardeners in the area. Although wealthier lowland Thais are familiar with hybrid carrots grown in local plantations and sold in the market, the hill tribe minorities are less familiar with the crop. Although their acceptance of carrots isn’t certain, early response to carrots at the Center appears favorable.”

If you would like to try these carrots in your area, write to us for a trial packet. Those working in agricultural development can request one packet for free. When you grow these carrots, make sure you do not dig up and eat the very best ones before seed heads have formed; if you do, you will in a sense be doing a negative selection, saving seed from the worst carrots each year. We will be interested to know how Uberlandia carrots grow in your area. In the meantime, we say, “Thanks, Reed, for a job well done!”